Iris Apfel is the Hardest Working Woman in Fashion 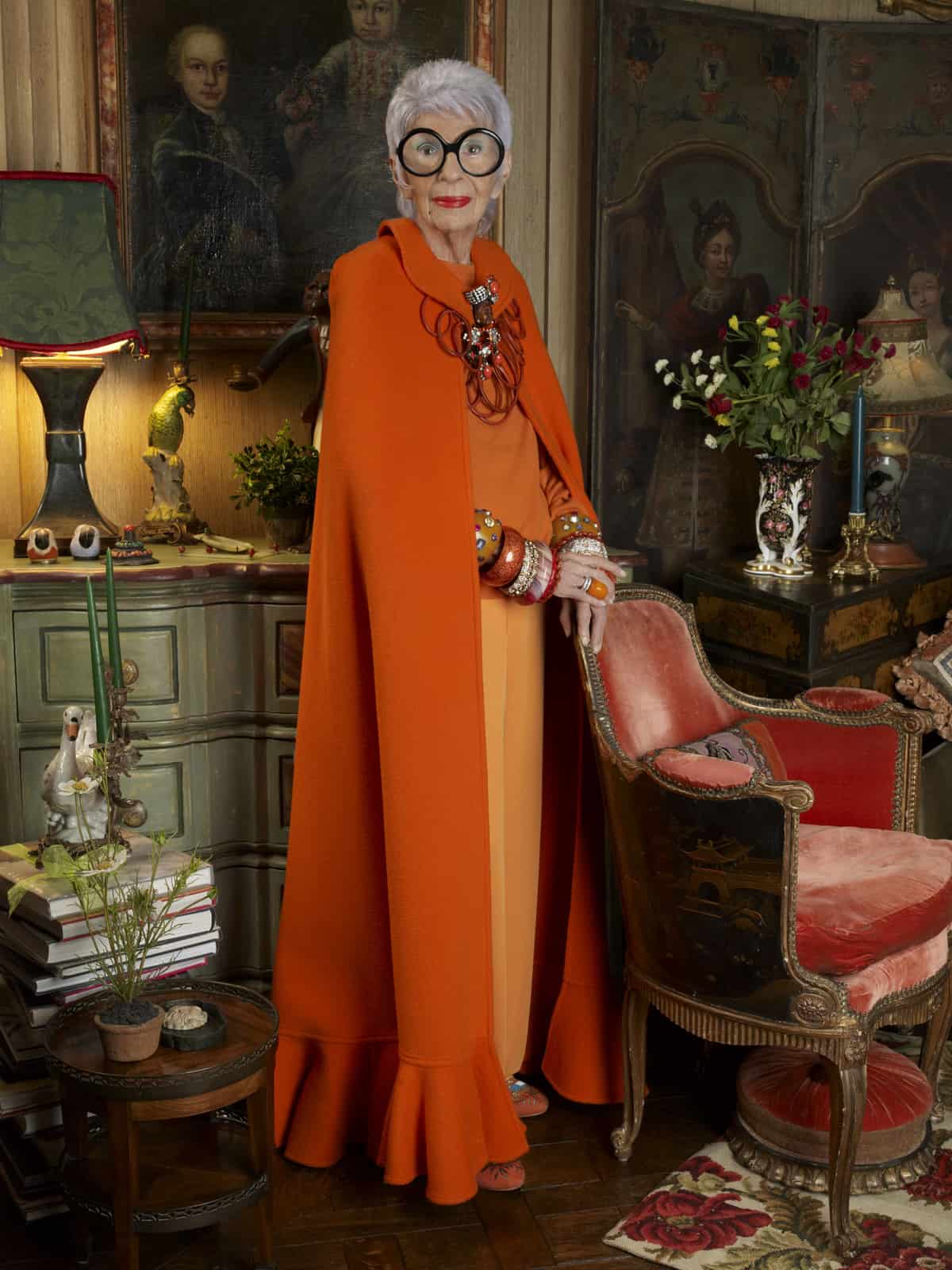 u201cOh my God,u201d Iris Apfel says, sighing, when asked about the projects on her plate. Thereu2019s the whimsical collection of memories and musings that make up the 96-year-old fashion staru2019s new book, Iris Apfel: Accidental Icon, which HarperCollins releases this month; the accompanying launch party, five-window display, and pop-up shop at Bergdorf Goodman; a roughly 50-piece collection of home furnishings in collaboration with Grandin Road; and, in the works, a line of porcelain jewelry with Bernardaud and a one-of-a-kind Barbie doll Mattel is making of her. This is all on top of designing her ongoing jewelry and clothing lines for HSN and mentoring young fashion students as a visiting professor at the University of Texas at Austinu2019s u201cUT in NYCu201d program.

u201cIu2019ve always worked very hard, but I lost my husband two and a half years ago, and we were together for 68 years,u201d Apfel says over the phone from her home in Palm Beach. u201cIt was a very powerful loss, and I decided I wasnu2019t going to stay home and weep. Iu2019m work-work-working, and I love it.u201d

The Queens-born Apfel had a successful first career in interior design, as the founder of Old World Weavers, the textile manufacturing company she started with her husband, Carl, in 1951. Although their work brought the couple to Europe, North Africa, the Middle East, and even the White Houseu2014they worked on decorative restoration projects for administrations from presidents Truman through Clintonu2014it wasnu2019t until age 84 that she became, as Apfel now calls herself, a u201cgeriatric starlet.u201d

Apfelu2019s second act really began in 2005, when she became the first living woman who was not a fashion designer to be the subject of a solo exhibition at the Metropolitan Museumu2019s Costume Institute. Rara Avis: Selections from the Iris Apfel Collection featured 40 different accessories spanning 40 yearsu2014from a Gripoix brooch to plastic cuffsu2014which Apfel styled on mannequins she dressed in clothes from her own wardrobe, like a 19th-century ecclesiastical vestment paired with Dolce & Gabbana lizard pants. The show introduced Apfelu2019s worldly, high-low, texture- and pattern-rich style to a wider public audience, and, through word of mouth, it became a must-see among the fashion elite, attracting A-listers like Karl Lagerfeld, Giorgio Armani, and Carla Fendi.

u201cIris is such an extraordinary aesthetic project herself,u201d says Harold Koda, the Costume Instituteu2019s former curator in charge, who oversaw the exhibition. u201cI said at the time, u2018Do not attempt this at home!u2019 What people donu2019t understand is that this kind of fashion collage can descend into risible chaos if the person composing it doesnu2019t have a highly sophisticated aesthetic background.u201d

People really have a yearning for glamour and fantasy and mystery.u00a0They like all this stuff they say they donu2019t.

Then, in 2014, documentarian Albert Maysles released Iris. The film follows Apfel as she haggles over bangles at a Harlem market, makes an appearance on HSN to sell her Rara Avis jewelry line, and celebrates her husbandu2019s 100th birthday. It provided an intimate portrait of Apfelu2019s life as a 90-something celebrity and further boosted her profile outside of the fashion world.

u201cPeople really have a yearning for glamour and fantasy and mystery,u201d Apfel explains of her styleu2019s appeal. u201cThey like all this stuff they say they donu2019t; they [say they] want to be so casual.u201d (Her outfit today, ironically: u201cFlannel pajamas. Itu2019s cold here.u201d) She cites the hours she spent playing with fabric swatches at her grandmotheru2019s house in Brooklyn and her motheru2019s resourcefulness with accessories during the Depression as formative experiences, yet she contends that style is the type of innate personal quality that cannot be taught: u201cItu2019s part of your DNA.u201d

Apfelu2019s quick wit and knack for pithy observation have also made her a natural at handling the media onslaught that accompanies every project. (She has never employed a personal publicist.) With aphorisms like u201cIf your hair is done properly and youu2019re wearing good shoes, you can get away with anythingu201d and u201cWhen the fun goes out of dressing, you might as well be dead,u201d sheu2019d be a natural on Twitter or Instagramu2014except for her conviction that social media is having a u201cdisastrous effectu201d on young people. u201cThey donu2019t know how to relate to one another; they donu2019t know how to do anything except press buttons. Iu2019m very opposed to it,u201d she laments. u201cI have a huge following on Instagram, but I donu2019t understand it.u201d (Her fan-run Facebook and Instagram accounts have more than 880,000 followers combined.)

As she enters her late 90s, Apfel maintains the wonder, curiosity, and drive that have guided her colorful life. u201cIu2019m always sitting on the edge of a volcano,u201d she says. u201cIf I have a nice, quiet day, I get nervous.u201d She still seems tickled by her fame, noting that she was u201cthrilledu201d that acclaimed interior designer Carleton Varney told her he was gifting a piece from her jewelry line to Gloria Vanderbilt and u201cso excitedu201d to discover that she has a u201ccontingent of drag queensu201d who buy her HSN products.