How One Chinese Vlogger is Inspiring Armchair Wanderlust 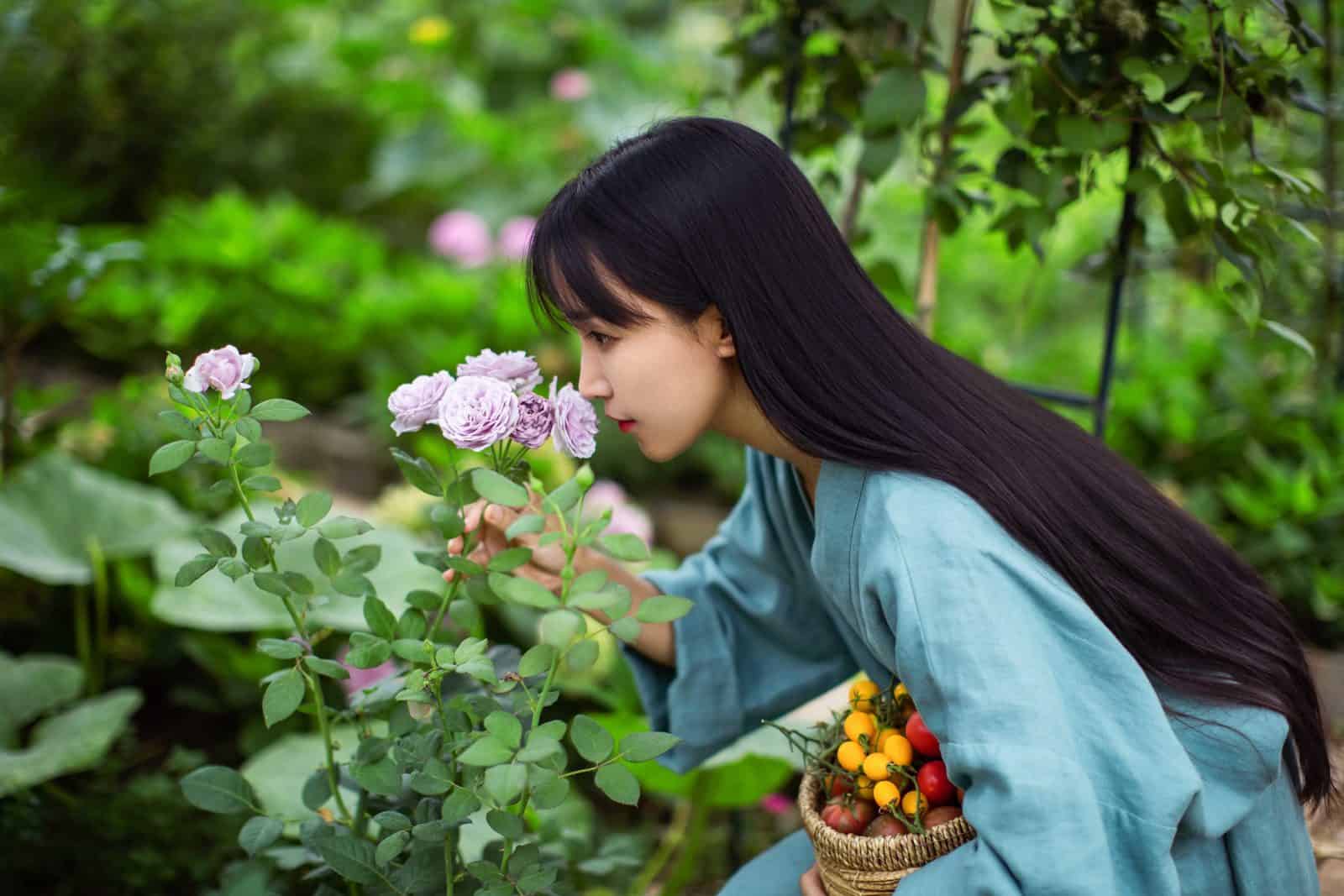 When Li Ziqi craves the taste of fresh bread, she bakes it in a dog-shaped oven she built herself from clay she dug out of a nearby hillside. When she wants a new lip color, she gathers beeswax from her apiary and mixes it with rose petals plucked from her garden. When winter is on its way, she raises silkworms, collects thousands of their cocoons, dries the raw silk by moonlight, and sews it into warm pajamas for her grandmother. And the Chinese vlogger documents all of these projects in mesmerizing videos viewed by millions of subscribers.

Set against a backdrop of misty mountains, Li’s videos are a glimpse inside a storybook life, one in which she is often trailed by lambs and puppies, Snow White–style. The only narration is friendly banter between Li and her grandmother, but the sounds—the singing of birds, the crunch of frost underfoot, the thwack of a cleaver, the sizzle of frying garlic—lure you into an ASMR trance, so you don’t even notice how many videos you’ve binged.

The sounds—the singing of birds, the crunch of frost underfoot, the sizzle of frying garlic—lure you into an ASMR trance.

I meet Li on a thatched wooden platform floating on a sea of lotuses, in her village in the north of Sichuan Province, where she lives a secluded life, despite her legions of fans. It’s a muggy summer afternoon and Li, who wears a floaty white silk dress, has prepared a fairy’s tea party. A clay kettle hums over a brazier, and she pours boiling water into a teapot filled with lotus petals, which are creamy white at the center, with pink tips that change to a dusty violet as they steep. She has just finished making a video in which she uses lotuses, a Chinese symbol of summer, in every conceivable form: lotus root porridge for breakfast; lotus petal tempura; beggar’s chicken baked in a cocoon of lotus leaves and mud; black tea stuffed into a lotus bud overnight to perfume it with the flower’s scent. Today, she’s using lotus leaves as plates, filling them with jiaozi dumplings and steamed buns, juicy grapes that slip out of their skins, and a vine-ripened yellow variety of tomato called First Love, which tastes like candy.

“I like to deal with vegetables because they’re simple,” she tells me, via translator, as I crunch into a tart green plum, a Chinese summer delicacy. “If you spend energy, they will pay results. If you irrigate and fertilize, they will produce sweet fruit.”

For Li, the simple life is a full-time job. Her projects are anti-convenience, the opposite of the Instant Pot meals and life hacks the internet celebrates these days. Her fans tune in to wind down after a long day at the office—ironically, by taking in a glamorized version of a different kind of labor, one whose fruits you actually get to taste. Li’s world feels totally detached from China’s hyperurban futurescape, but at the same time she expertly wields digital media to preserve a culinary heritage. I ask her which part of that paradox she identifies with: Does she see herself as traditional or modern? “Both,” she says. “I hope more people learn about Chinese traditional culture with my efforts. This is very meaningful.”

Li learned to cook by watching her grandfather, a chef in a village of silkworm farmers who taught her tricks like when to wait until the wok is hot before adding oil and when to pour the oil in cold. “It was part of our life,” she says. “When I was young, my parents went to seek jobs in cities. No one was cooking at home, so in order to take care of myself, I gradually acquired many life skills.”

At 14 she also left, to work in Mianyang, where for eight years she tried to make it by working as a waitress and—though it seems incongruent with her aura of tranquility—a DJ in clubs. But she was always dreaming of country life. She was called back to the village in 2012, when her grandmother got sick, and in order to make a living she tried selling clothing and food on the e-commerce site Taobao. Watching her brother post videos of himself playing music on the Chinese video-sharing app Meipai gave her the idea of attracting customers to her shop by uploading videos of herself cooking her childhood recipes onto the Chinese social media platform Weibo. The peach trees were in full bloom at the time, so in the first clumsy foray—shot on a phone in 2016—she made peach blossom wine. “I thought it would be interesting for people to know where their food comes from,” she says.

She was right. Her popularity can’t be traced back to one viral video, but her following grew steadily, with boosts from shares by Chinese food bloggers and praise from the Communist Youth League’s official Weibo. She now has more than 19 million
fans on Weibo (for context, Beyoncé has 19 million subscribers on YouTube), and her videos have been watched nearly 3 billion times. The rest of the world started catching on in 2017, when she began posting monthly on YouTube, where each video gets an average of 8.6 million views and racks up comments in the tens of thousands. (Most are in the vein of “What is this fairy tale?” and “She’s so talented—why can’t I even clean my room?”) The video of the homemade clay bread oven alone has 316 million views, and her shop on China’s Tmall website now ships Li Ziqi–branded delicacies such as honey with ginseng, chili sauce based on a Qing Dynasty recipe, and bird’s nest soup all over the country. The moment Li knew that her work was making an impact was when a fan told her about a schoolteacher in a big city who showed her videos in class; the students were surprised to learn that rice grows in fields and not on trees.

There is a certain style of cooking video that dominates social media feeds these days: shot from above, hands whizzing in to dump things into one pot (and one pot only), a snap of the fingers, and voilà—the comfort food stuffed within another comfort food is cooked and plated. These videos end with a zoom into the “crave shot”: a gratuitous cheese stretch or a gush of melted chocolate.

Li’s work is the aesthetic opposite. Her version of the crave shot is a morsel of a home-cooked meal offered to her grandmother in their outdoor kitchen. She doesn’t include measurements or step-by-steps; that would break the spell. “Foreign cuisine specifies exactly how many grams of ingredients to add,” she says. “Chinese pay more attention to emotion and feeling. For me, this touch of warmth and taste of home is the secret to Sichuan cuisine, and even Chinese cuisine.” To say her dishes are made from scratch would be an understatement—her projects start with seeds, and interspersed time-lapses of the movement of the stars or ink-painting clouds rolling across the sky suggest that the rhythm of the seasons is part of the process. “If you pay attention, you will observe that the crops are different every day,” Li says. In fact, the traditional Chinese calendar has 24 solar terms, mini-seasons with names like “more rain than snow” or “hibernating insects awaken.” Urbanites, distanced from these subtle changes, “are longing for the idyllic rural life,” Li says.

The enchanting allure of Sichuan, known to the Chinese as Heavenly Country, pulls its weight as Li’s costar. “Life in Sichuan is at ease,” she says. “It’s a healthy, slow-paced lifestyle.” Her village is about an hour’s drive from Mianyang (a city most people outside of China have never heard of, even though it has twice as many people as Houston), which is a short bullet train ride from the provincial capital, Chengdu, consistently ranked as China’s happiest city.

Though Li now works with a professional videographer, she still edits and obsessively shapes every detail of her videos. Once, she tells me, she climbed for nine hours to capture a shot of sunrise on the snowy mountain peaks. She thought she would freeze to death, but “in order to not miss the moment, I kept myself awake the whole night, staring at the camera, and waiting,” she says. “The final scene is only a few seconds.”

Li isn’t one of those lifestyle gurus who implies that we could—or should—live like her. She doesn’t have any designs on getting you to go back to the land or build a sofa out of bamboo. If she inspires a bit of creativity, that’s a plus, but she mostly just wants to sweep you away for a few minutes. “Modern metropolitans have a lot of pressure in life,” she says. “I hope when people are watching my videos after finishing a hard day’s work they can feel relaxed, less stressed—even for only a moment.”

It seems counterintuitive that watching someone work as hard as Li does could be so soothing, but like a dancer whose effort makes her movements look effortless, she consciously glosses over the muddier realities of farm life. “The lifestyle depicted in the videos is also the lifestyle I’m longing for,” she says. “Once, in Mianyang, it was raining for half a month, and all the plants were flooded. I needed to clean it up and grow everything back. Things like that happen. I didn’t shoot it, because everyone’s time is precious, and I hope the content I show brings comfort rather than heaviness.”

It speaks to just how appealing she makes DIY look that threads on Reddit smolder with doubts that one woman could do it all herself, and even speculation that she’s a state-sponsored propagandist designed to sell us all on the rural slow life. “Most children who grew up in this area have the same knowledge as me,” she says with a shrug—although it’s clear that these comments rankle her because they negate the amount of time she dedicates to planning, experimenting, and editing.

Any suspicion I might have had about huge production teams or slick tricks of the lens dissolves, however, when I watch how artfully she tackles a task as simple as wrapping up the leftovers from our picnic. Holding a giant palm leaf, she tells me that one day she was picking strawberries and didn’t have anything to carry them in, but she remembered how, when she was a child, her grandfather used to weave cages for pet crickets out of palm leaves. She splits the leaf into segments, braiding them into a spiral with her unpolished fingertips. She falls silent, throwing the drone of summer cicadas into relief. Her hair, so long it almost brushes the mat we’re sitting on, falls over her face as she bends in concentration. A basket takes shape through her fingers. “It could be a hat!” she laughs, putting it on her head and pulling the handle down over her chin. Then she flips it back over and fills it with fruit, ignoring my protests that I won’t be able to eat it all.

Later, on the bullet train back to Chengdu, while the commuters around me gaze into their screens, I bite into a First Love tomato. The juice dribbles down my chin. I savor the sweet simplicity as the rice paddies we’re gliding past morph into identical rows of high-rises.

In which Li plows a rice field and also makes beer from wheat she has grown herself.

In which Li rides a horse to collect magnolia blossoms that she makes into a sauce, a cake, and an omelet.

In which Li makes everything from scratch for hotpot, including grinding her own chili powder.

In which Li ferments roses for three months to make rose sauce, as well as her own rose rice wine.